The Irish Patchwork Society was founded in 1981, following a meeting in the National Gallery in Dublin of 100 like minded people interested in patchwork. The idea came from the combined enthusiasm of three people, drawn together by their interest in textiles and patchwork. 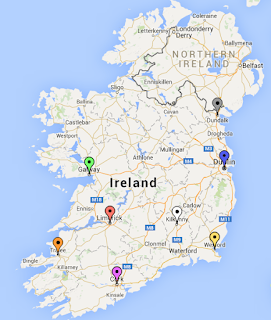 Today, The Irish Patchwork Society consists of 8 branches around the country with over 600 members. Branches hold monthly meetings from September to June.  Our meetings include guest speakers and in branch demonstrations.  Branches also run 1/2 day and full day workshops throughout the year.

Every 2 years a sewing retreat is organised by the Society at An Grianan, Termonfeckin, Co. Louth where weekend workshops are offered.


The Society publishes a quarterly newsletter.  As well as regular exhibitions organised at branch level, the society holds a bi-annual national exhibition.

The 2016 national is being hosted by the Mid- Western Branch on the theme of Evolution. The exhibit will run from the 12th to the 22nd July at the Limerick School of Art and Design, Clare Street, Limerick and all are welcome!

The IPS is a member of the European Quilt Association (EQA) and participates in annual challenges which are exhibited at the Festival of Quilts in Birmingham.

We also have a close relationship with our friends in the Northern Ireland Patchwork Guild and we take turns to host a joint exhibition every two years called 'Hands Across the Border.

Members elect an Executive Committee which concentrates on national activities, each branch is represented on this committee.  The executive also makes two appointments with specific areas of responsibility, an International Representative, a Crafts Council representative.

The well-known “Irish Chain” block seemed an appropriate design for the Society's Logo and remains a design source for our logo re-designed in 2008.

The Irish Patchwork Society was founded in 1981 to promote the practice and art of patchwork, applique and quilting in Ireland. There are currently 8 branches located throughout Ireland.

Promote your Page too